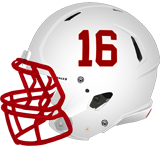 The Panthers drew first blood last week against the Marple Newtown Tigers when they scored on their first possession with a dramatic 4 play, 74 yard drive. The Tigers came right back and tied the game and then slowly, methodically just kept the pressure on and kept adding points holding the Panthers to just one other score but nailing the door shut with a 16 point fourth quarter.  The Panthers showed a valiant effort.

The Upper Dublin Cardinals come into the playoff game seeded #4 with an 8-1 record and have pretty well overwhelmed the teams they played. Their one loss was to Plymouth-Whitemarsh in the first week of October in a close 24-21 game.

Their numbers are modest and they spread the ball around in both running backs and recievers. For a high school team they are well-balance rushing for 209 yards per game and passing for 121 yards per game. Quarterback #12 Justin Horn leads the team having thrown for over 1,000 yards this season. Horn is also their leading rusher with 444 yards. That makes him a serious multiple threat.

Horn will look to hand it off to #6 Michael Cottom with 390 yards but his work horses, particularly for short distance and finding the end zones are #3 Malik Bootman and #5 Phillip Butler. Horn has thrown the ball to no less than 15 different receivers but his favorite two are #11 JT Breslin and #1 Jalen Heim.

The Cardinals have speed and balance (similar to last week’s contest against MN). We suspect that Haven will shake things up a bit this week at practice and try to run some plays that are new and unexpected.  While we applaud that decision we think the most important thing this week are for the Panthers to play a complete game.  Late 3rd and 4th quarters have not been kind to Haven.  For whatever reason, Strath Haven hangs within striking distance with almost every team they play and then lose it towards the end of the game.  The boys in silver and black are going to have to dig deep and find a way to play four complete quarters of football. If they can do that and show the Cardinals a little different game plan they can pull off a playoff game win!