Posted on October 5, 2016 in Havenfootball.net. 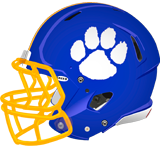 The football gods were working against us when we played Haverford two Friday nights ago. Haven played reasonably well but had one terrible three minute run where the Fords returned an opening second half kick-off for a touchdown and then a bubble pass turned into an 85 yard scoring play. This past Friday night karma was returned to the Panther side as Penncrest fumbled the first two kick-off receptions turning the ball over to Haven and giving the Panthers a 14 point advantage in the first six minutes of the game with the Lions not even having had a play from scrimmage. The Panther defense kept up the pressure and Haven just continued their romp to seal their third victory of the season.

If momentum is a key to victory the Springfield Cougars will be coming into George L. King Field this Friday night with the incredible momentum of a 6-0 season. Until they took on Ridley last week there were lots of conversations about how good the Cougars might be. They had won five games but against the weaker teams in the Central League. Ridley would test their mettle. Both teams fought to a 14-14 tie and then Springfield pulled out a miracle they hadn’t managed since 1994…………long before any of the players on either team were born.