Porte, Academy Park rely on experience to get job done

The Academy Park football team poses with its District 1 championship trophy, its third in four years, with a 24-18 win over Springfield in the Class 5A final. (Digital First Media/Anne Neborak) 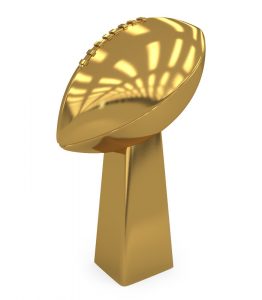 With an authoritative baritone that blankets an open field like the steady rain falling Friday night, Togba Porte made known the primary difference between his Academy Park team and Springfield.

“We’ve been here before,” the defensive end, who sings the national anthem before home games, intoned as he stalked the sidelines. “They haven’t.”

Under the bright lights of a district final, this one in the rejiggered District 1 Class 5A, Porte knew that the pressure would strike both sidelines at some point, like a linebacker bursting into the backfield (of which the collision packed plenty, too).

When that inevitably occurs, Porte implicitly asked, who reacts first? Or best?

Springfield responded admirably, like a top seed and the champion of a Central League that generated two district finalists. But Academy Park’s answer to adversity, time and again, reflected its championship pedigree.

Webmaster’s note: You can listen to the game in its entirety by clicking on our game archive graphic on the right side of this page.