Webmaster’s note:  This is our second year of Strath Haven football without the fabulous Jack Hontz, Strath Haven’s legendary music director.  We felt this article by David Swanson, published on September 16, 2017, was a great tribute to a great man.  We should note that Jack was a great supporter of our pages and our broadcasts and we miss him so very much. As future generations of students and parents experience Strath Haven without Jack we wanted to make sure they know the story of the storied Marching Band.

The 420 members of the massive Strath Haven High School Marching Band will fill the football field at this Friday night’s home game to serenade their angel, the late Jack Hontz, who nurtured the band he loved for 34 years by finding a place in it for every student who wanted one.

Hontz, 57, who suffered a fatal heart attack in June, will always be remembered as the all-music, all-the-time muse who inspired one-third of the Wallingford, Delaware County, high school’s 1,200-student body to march in the Panther band as musicians or as members of the honor guard, flag squad, dance team, and dance line. 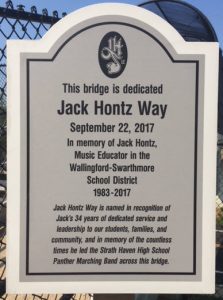 No prior interest or talent in music was required, said Patrick Murray, one of Hontz’s former students, Class of 2010. Murray now teaches music at Strath Haven and directs the marching band.

As an entering freshman, Murray said, he didn’t play any instruments. “Jack was always about having as many tubas in the marching band as possible. They look impressive. So Jack approached me at the end of my freshman year and said, ‘I could use some more tubas.’”