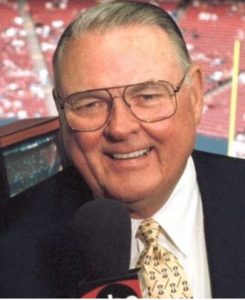 Legendary broadcaster Keith Jackson considered the voice of college football for more than a half-century, died late Friday night. He was 89.

Forever remembered for his signature “Whoa, Nellie” call on ABC Sports, Jackson was one of the most popular play-by-play personalities in the business. He was surrounded by his family when he passed way.

For generations of fans, Keith Jackson was college football,” Bob Iger, chairman and CEO of The Walt Disney Company, said in a statement. “When you heard his voice, you knew it was a big game. Keith was a true gentleman and memorable presence. Our thoughts and prayers go out to his wife, Turi Ann, and his family.”

Jackson, using his homespun phrases, was credited with nicknaming the Rose Bowl “The Granddaddy of Them All” and Michigan’s stadium “The Big House”.

Jackson began calling college football games for ABC Sports when it acquired the broadcast rights for NCAA football in 1966. He also worked NFL and NBA games, numerous World Series, 10 Olympics and auto racing, and he traveled to 31 countries for “Wide World of Sports.” In addition, he was the first play-by-play announcer in “Monday Night Football” history when the NFL program debuted in 1970.

Jackson announced he would retire from college football play-by-play after the 1998 season, but he ended up continuing with ABC Sports.
His final game was the classic 2006 Rose Bowl between USC and Texas when Vince Young scored on fourth-and-5 in the final seconds near the goal line to win a national title for the Longhorns.

Bob Griese, who was Jackson’s long-time broadcast partner on college football games starting in 1985, was asked what he would remember about him.

“That big smiling face, and just the thrill and the love he had for doing college football,” Griese told ESPN. “He did it for a long, long time. … He never intruded on the game. It was always about the kids on the field. Never, never shining the light on himself. And that was one of the things that I most admired about him.”

(Web master’s note: Mr. Jackson was kind enough to record three of our tag lines that we use to bring the broadcast back from commercial break.  You can hear his voice on all of our broadcasts since 2009.  He had a remarkable career and he will be missed)