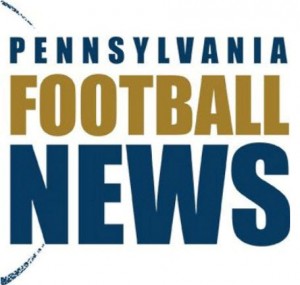 For three quarters the Panthers and Vikings battled, punted, fumbled and turned the ball over on downs. Neither offense was able to finish a drive with points. Eight drives in those first three quarters came up empty.  “That’s a nice team over there. We had a kid on the line out for the several weeks, we didn’t use him in the first half, that’s senior captain Sam Burk. He came back in the second half and just did a great job for us” said Panther head coach Kevin Clancy. Starting at their 27, the home team went on a 14 play drive that ended when quarterback Jack Ryder crossed the goal line from 1 yard out.

Upper Merion’s offense found their footing on offense on the ensuing drive. Taiyan Lobban returned the ensuing kick 43 yards to the Panther 39, and the Vikings were able to tack on 15 more from a face mask penalty putting the ball at the Strath Haven 24. On the first play Anthony Swenda went right up the middle and into the endzone. The Vikings head coach, Victor Brown, made a decision to go for two. Linebacker John Prochniak held his position and took down Swenda just short of the goal line preserving a 7-6 lead with 9:22 left to play. “We weren’t ready to go home. I knew they wanted to get the ball in their best players had, we knew we had to make the stop. I’m just happy we made it.” said Prochniak.