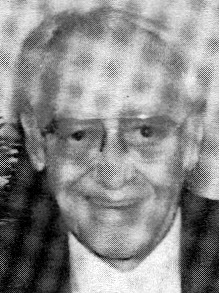 Jim Lawler, a 42 year resident of Nether Providence, died this past Sunday and we buried him today. Jim was just an average guy who got married at the end of World War II, raised a couple of good kids and did his job as an engineer at Sun Oil Company. He never made a lot of money. He lived his life like most of us live ours.

What did set him apart from others, however, was his devoted following of Strath Haven Football. Long before the Panthers were the much touted power-house they are today he was in the stands, both home and away, for every game. He knew the kids numbers, their stats, their positions. He stayed up late on Fridays to watch the news to see if “his team” got a mention or some air time. He would even go to other high school games just to see how he thought his Panthers measured up.

That’s how I met Jim. At a Panther football game five years ago. Jim’s vision wasn’t as good as it use to be and he really didn’t like to drive very far at night. He called me and wondered if he could “impose” on me to give him a ride to the away games. My oldest son was on the varsity team at the time and he knew I would be attending all the games. So began the fall tradition. Jim and I together, traveling Delaware County in search of one more glorious night of high school football.

Other than the rare business trip for me (Jim had long ago retired) we never missed a game. We always sat together and would often discuss our thoughts about which offensive play the Panthers should run next. We always sat in the same seats at home games. Jim would get there early and get our seats and I (along with my kids) would get there as soon as we could. We sat together and ate hot dogs, drank hot chocolate and rooted for our beloved Panthers.

Jim once missed a critical playoff game due to a funeral he had to attend for a family member. When we got together the following week for the next playoff game we made a vow to each other that, if we had any say in the matter, we would not die during the high school football season.

Jim became ill this past spring. His kidneys were failing and he had to undergo dialysis three times a week. The dialysis worked but took too much out of him. He shrank to 100 pounds and was too sick and too tired to attend any of the Panther’s games this year. People would see me sitting in the stands, without Jim, and would ask how he was doing. We all hoped he would get strong enough to attend at least a home game, but it was not to be.

Jim privately made his decision in December not to continue his dialysis. He knew he would have no chance without it but he felt he was never going to get better and he was too tired and too ill to continue.

Jim came home a week and half ago. I saw him almost every night after work and although he was in some pain we talked a lot about Panther football. We even spoke a little about next years team, a team he knew he would never get to see. We talked and talked until Saturday when the poisons in his body effected his brain. He went to sleep Saturday afternoon for the last time. He died quietly late Sunday afternoon.

We buried Jim today. He was dressed sharply in his best suit with rosary beads in his hands and a Strath Haven baseball cap at his feet. His best suit, his strong faith and his adored Panthers. Jim knew his priorities.

Like Jim, I love Strath Haven football. I will be at the games next season but I am sure they will seem a little quieter, a little less joyous and I am sure I will shed a few tears remembering our games together. Jim Lawler was just a regular guy but he was my friend and I shall miss him a lot.